5G is eagerly anticipated by all, the promise of high speed, low latency and the ability to shift large volumes of data, helping fulfil the early promise of wireless internet.

Prototype trials abound and whilst there’s still quite a long way to go one thing has become very clear, a whole lot more power is going to be needed to power the network.

Remote Radio Units (RRU’s) are about to be supplemented with Active Antennae Units or Massive MIMO configurations incorporating many integrated transmitters and antennas designed to direct real-time streams of data to each user. Moreover, RRU’s carrying today's 4G LTE technology are themselves likely to be getting a makeover to become 4Tx 4Rx MIMO’s. 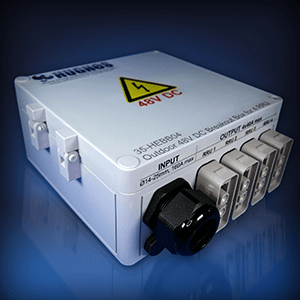 All this extra power requirement has to be moved around the site and delivered to the antennae equipment safely so it’s clear that improved power handling equipment is going to be needed.

It is not uncommon for existing 4G sites to incorporate 3x RRU’s (not to mention any legacy 3G or 2G equipment) so the first and most obvious change is that the addition of AAU’s to such sites will require at least one more output than is generally available on existing equipment!

In perspective though an RRU requires only 300W input to power 2 transmitters, an AAU, on the other hand, can incorporate up to 64 T (Transmitters) and whilst each transmitter requires less power (than a typical RRU) the required power aggregation for a 64 T AAU, for example, is in the magnitude of 3 to 4 times greater than a typical RRU.

So assuming no 2G/3G legacy equipment, DC power requirements on a site that is upgraded to 4Tx 4RX on the 4G side with the addition of a 64 T AAU are going to need quite a lot more power 2.2 kW in fact, and that’s just for starters, power requirements look set to climb moving forward not fall.